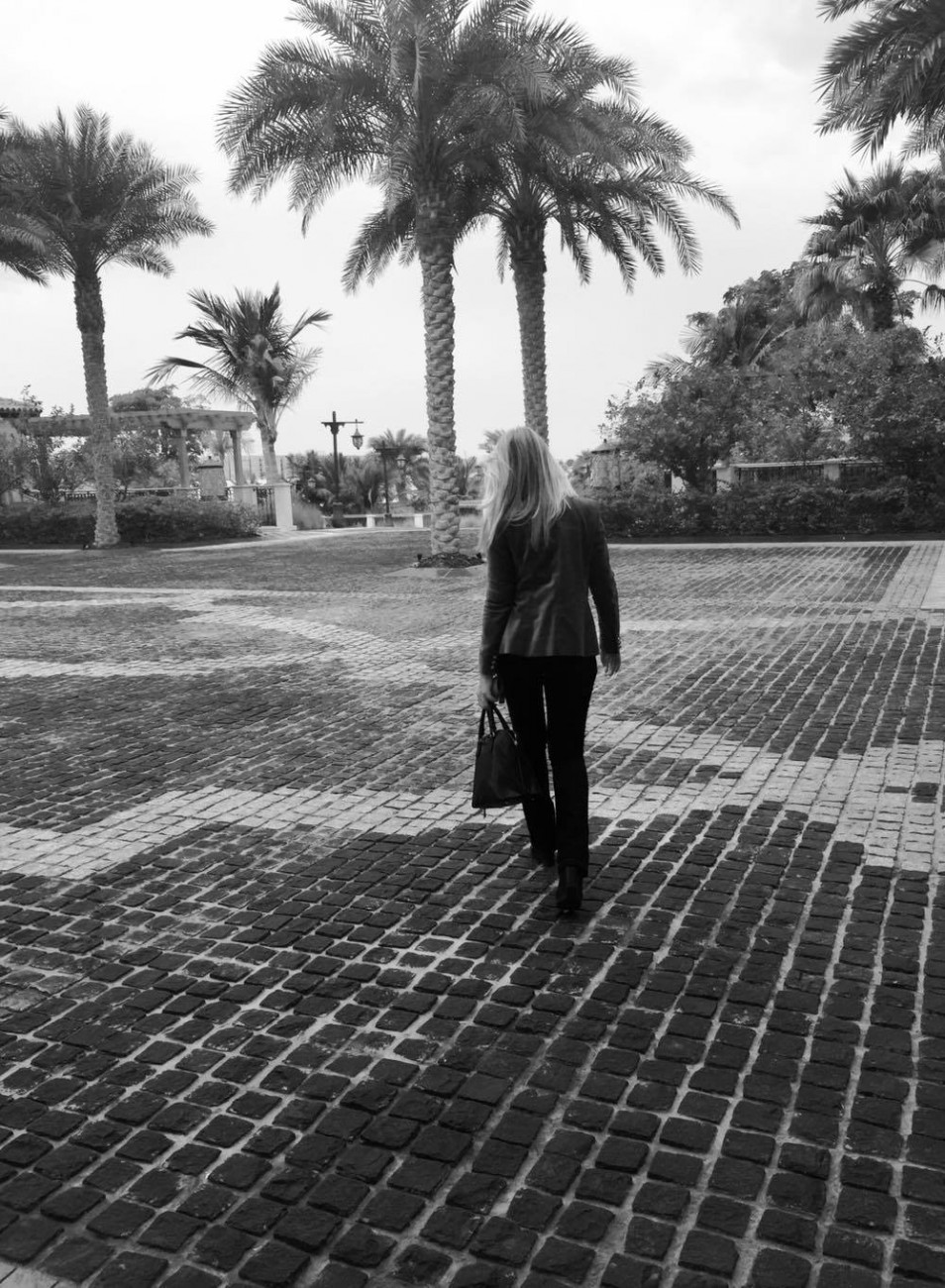 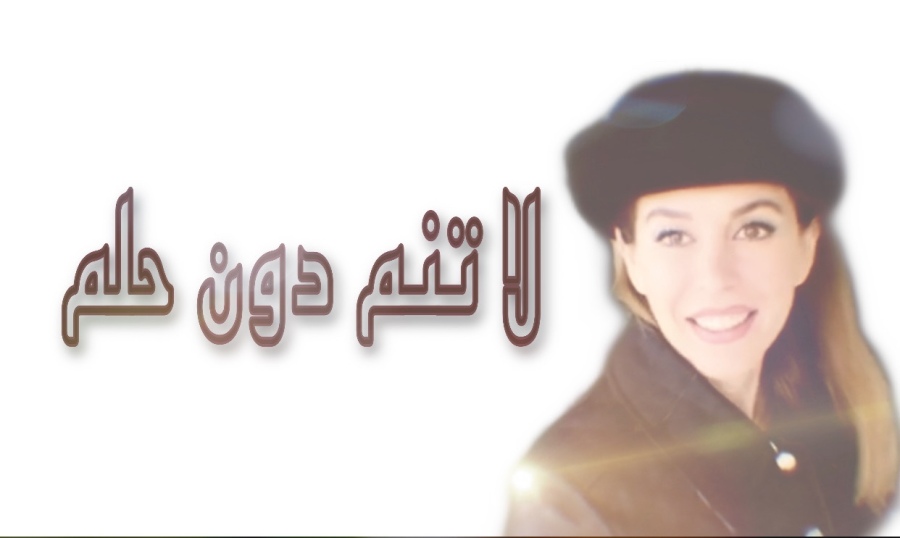 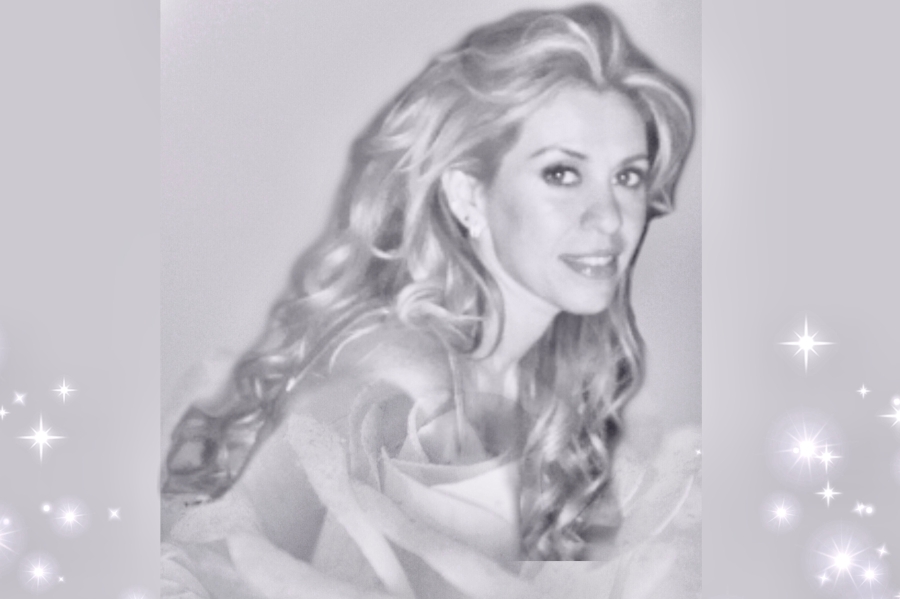 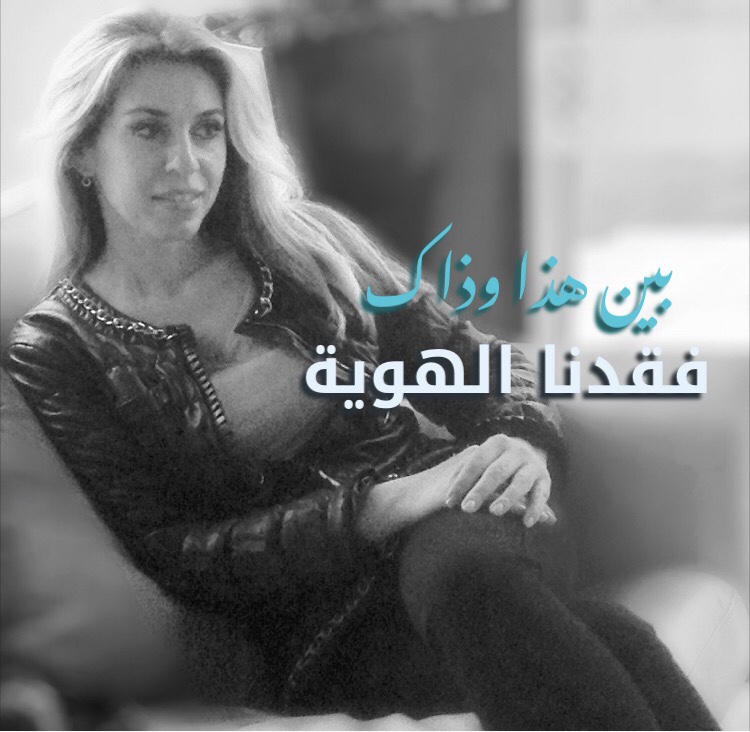 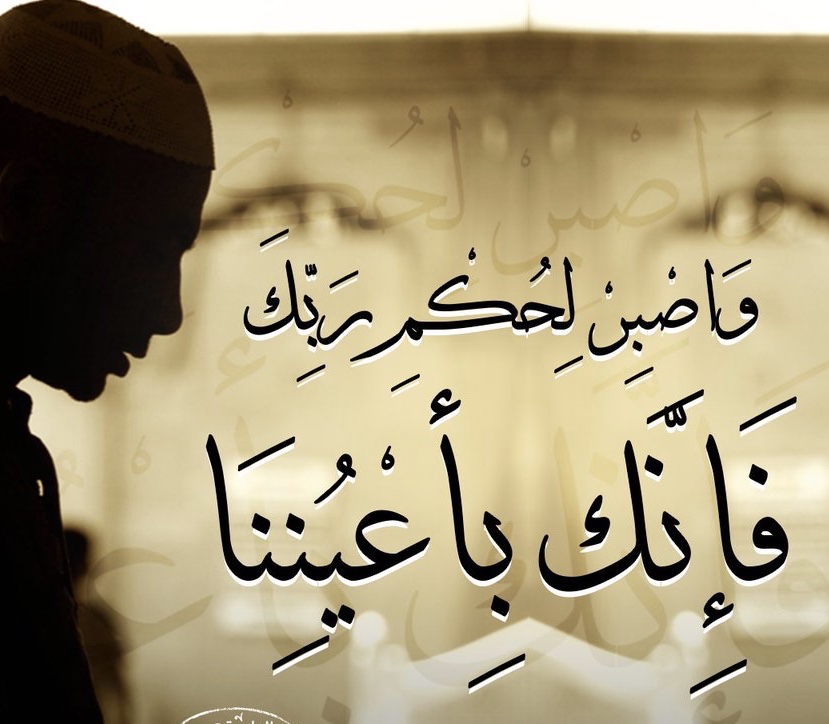 How can all the pain, suffering, calamities, grief, challenges be to our benefit?

This is something that most people struggle to understand and appreciate.

Let’s start with this analogy:

You can either choose to study medicine (also law in the case of the US), and spend long years of arduous work, sleepless nights and tremendous stress, in order to eventually secure a lucrative future and guaranteed income.  Or, you can choose an easier, quicker-to-finish discipline such as Arts and Humanities but then go through life on average income, with the risk of potentially being unable at certain stages to generate income or find a job.  Most would wish they could go through the painstaking journey of studying medicine had they the resources of cleverness and financial support realizing the eventual rewards that come with it, and no one can criticize them or wrong them for that.  They need the struggle in order for their knowledge, wisdom and skills to develop and become adequate enough to undertake the responsibility of tampering with human life at such direct level.

Same can be applied to life struggles in general.  Paradise is an unimaginable bliss.  It’s a place where people live as the Quran describes: “(15:47) And [by then] We shall have removed whatever unworthy thoughts or feelings may have been [lingering] in their breasts, [and they shall rest] as brethren, facing one another [in love] upon thrones of happiness.”    We are only able to reach that state of purity of heart, lack of any worldly desires or feelings after we have been through suffering and difficult trials.  Very mistaken is he who thinks this life is about finding happiness, or that REAL happiness in every sense of the word even exists in this life.  This phase is all about preparation and elevation to become worthy of Paradise.  Not allowed to enter Paradise are those who still have inside, to any extent, any of the worldly character diseases/faults such as greed, envy, jealousy, deception, ego, etc.  The community that will populate Paradise will be that of the highest ethical and spiritual level, otherwise it wouldn’t be Paradise.  A level we cannot be elevated to except by going through trials, struggles, pain, challenges, till we recognize how petty are things that otherwise dazzle our sight.

How happy are we when we finally reach the level of fitness and the physique we’ve always dreamed of, even though we had to work at it for many many hours, and suffer pains, sometimes injuries.  Yet we gladly embrace all of that having set in front of us the target.  In a similar manner we should embrace what we have to go through in life in order to achieve a target of eternal bliss.  I always say that if Paradise was only about never ever experiencing worry, pain, fear, hunger, grief, etc., then that alone qualifies as eternal bliss regardless of the infinitely other promised bounties.

Going back to the initial question… How can it be all good?

Going through the hardships in life has four aspects/benefits:

People who suffer one or more very painful experiences especially the loss of a loved one, and I’m one of them, often come to see the wisdom of what they went through.  They eventually find a level of tranquility, serenity, free from worries, that they have never experienced before in life.  So much so that challenges become a welcome experience as they result in more self-development than any one study program. 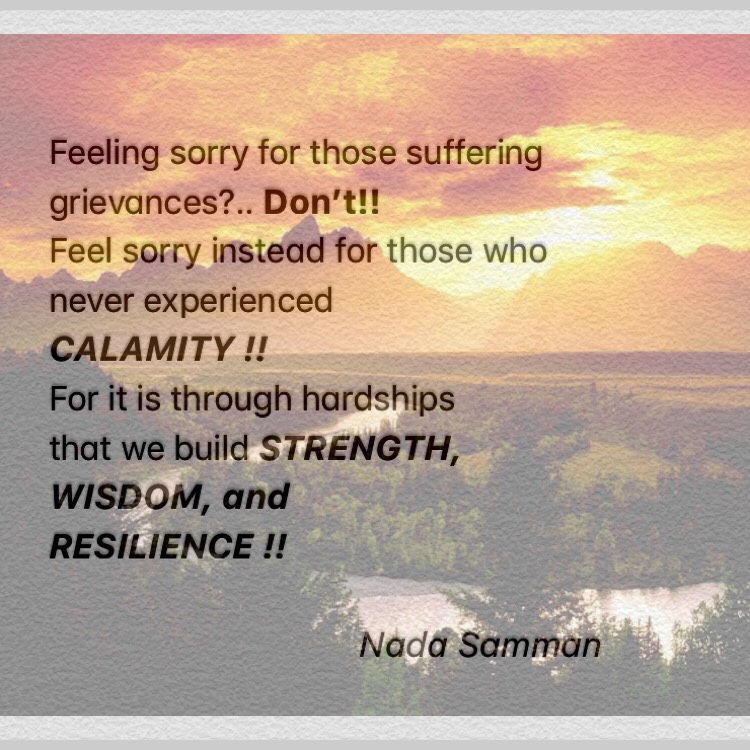 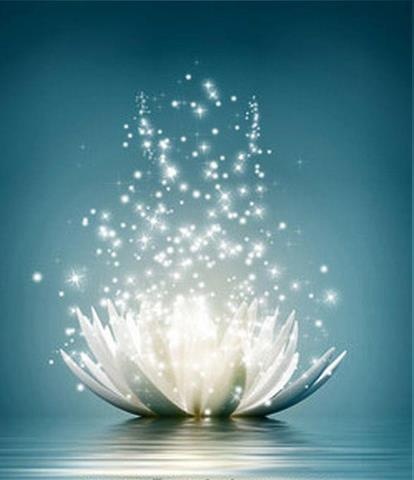 Do Notpraise me if I don’t deserve praise.

Do Nottell me I look good just to flatter me, or hoping that I “return the compliment”.

Do Notlike my photos, posts, or what I write if you don’t really like them or you disagree.

Do Notsend me happy birthday wishes if you do it out of courtesy or duty.

Do Notgift me for any reason other than sincerely wanting to.

Do Not tell me you like me or miss me if you really don’t.

Do Not commend any of my acts if they’re wrong or unjust.

Do Not support me if I stray.

Do Not tell me I’m good when I’m being bad.

One genuine, loving, sincere word is to me worth much more than all the fake likes and compliments.  And one genuine, sincere, loving friend is worth a hundred fake ones.

I totally understand being nice to people, wanting to make them feel great and lifting up their spirits.  This is honorable and commendable.  But when it’s done for special interests, expecting reciprocation, in social hypocrisy, or for fear of upsetting the praised person, it becomes ugly and distasteful. 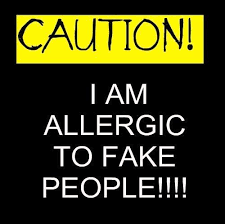 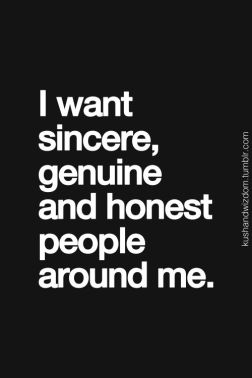 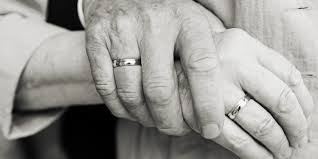 It’s not “pretentious respect”… It’s not about being flamboyant, dazzling or charming the woman in your company with “the right moves, looks and words”… It’s about honest, genuine, and deep respect; genuine love, that manifests itself loud and clear not just in her presence, but more importantly in her absence…

If I hadn’t seen it first-hand, I would NEVER have believed such a man, especially an Arab, existed.

This man sets the bar so high, although essentially this is EXACTLY how marriage should be.  Restoring my faith in men, eliminating a myriad of bad stories I heard and saw associated with marriage, there are wonderful men out there, in every sense of the word “Wonder”.

So here’s the story…

A few days ago I was invited to a dinner with several people, high status business men and women.  One character was especially astounding to me, actually to everyone, not for any reason other than his unbelievable love, loyalty, and respect to his wife of 35 years of marriage.  The man literally spent half of the whole evening (if not more) talking about nothing other than her, how deeply in love he was with her, how he respects her and his in-laws, how proud he is that he never EVER cheated on her with another, not even with as much as a phone call, or a single flirtatious word.  How they never eat a meal, travel, attend an event, without each other.  How even when he has to take the odd quick trip without her, he doesn’t start having breakfast till he turns on his mobile (which has a picture of her smiling as wall paper!!) and places it in-front of him then starts eating.

I wouldn’t have believed it, and would’ve thought he’s idolizing himself in order to impress, had he not have her photo as mobile cover, had countless photos of her walking, talking, eating, laughing, the guy was as obsessed as anyone could be with the one he loves.  He showed us a sample of his daily morning whatsapp messages to her (and to his two daughters, lest they’d get jealous, which were also different than the mother’s messages) containing sweet words of love and prayer that God Blesses and Protects her for him.

I wouldn’t have believed it had I not seen myself how as he was approaching us from afar to the location of the restaurant to make intros, and was accompanying one of the businesswomen (stunning if I may add), had kept meters separating them while walking, actually even using the slope while she used the stairs with a rail barrier in between, simply because he never wants to put himself in a position of suspicion, any slight temptation, or even insinuate in any way to this lady or any other, EVER, that he might even consider any personal communication with any other than his wife.  He mentioned he even usually calls his wife when with a company comprising ladies and puts the video on making intros so that she and the ladies feel that her presence (even if just virtual) is respected.

It wasn’t out of fear as one may think, because there’s no way for his wife to verify any of his stories in her absence.  Nor was it for religious reasons because, as he put it, “Although it’s what our religion calls for, but to me it is more of what I consider to be the logical, ethical and acceptable approach to establishing a solid relationship, setting the standard and model for the whole household”.  (For those curious, he’s a Muslim).

It was merely and purely out of tremendous respect for his lifetime partner, and very high moral standards he’d set for himself and boasts of.

It was felt in every single word he said as he went on and on about her, her family, their way of life.  He was also describing why this has to be the way in marriage, and the way a wife is treated.  I just couldn’t believe my ears comparing his words to the pathetic patterns we see and hear of nowadays, defacing the concept and institution of marriage.  Those who glorify themselves in managing God-knows how many cheating incidents, “living their life to the fullest” without being caught.

And as if this all wasn’t enough, and to the surprise of all surprises, came the last and most profound piece of evidence that sealed my belief in the genuineness of this man’s words.

As we headed out and waited for our cars to be brought by the valet, he called her.  Yes, he did, for a quick chat.  Not the last one for the day as he explained, since there’s still that call right before going to bed.  But that wasn’t what surprised me.  What to me was absolutely incredible was the look on his face while he talked to her, his facial expressions, the glow and smile on his face as they joked and giggled, the tremendous amount of love you could see in his gleaming eyes.  It was as if he was talking to her for the first time.  Our cars came and he was still talking to her, we waited courteously till he (reluctantly) ended his call to bid us farewell.

Nothing could describe the way he looked while talking to her better than a teenager talking to his new found love.  You just can’t fake that !!!

His own words were: “If not her, the one who believed in me enough to trust her life and future with me, who else deserves my respect and honor out of all the people I deal with throughout life?!”….

Greatness truly comes in different forms… God Bless him, his wife, his family, and the love they share.

And just an FYI, this man is ex-military for many years, yet he comes with such humility and tender heart towards his wife and family first and foremost, then towards other people.

Women, don’t settle for less, but you have to be to him a wife worthy of such love.  It always takes two. 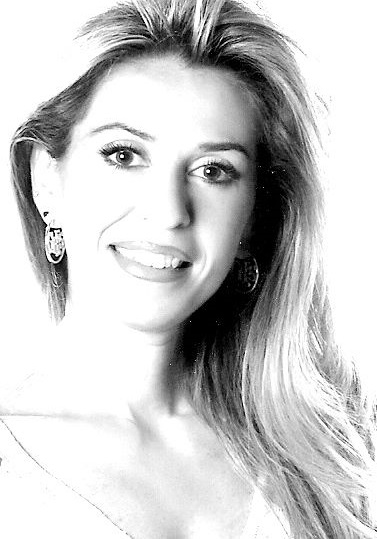