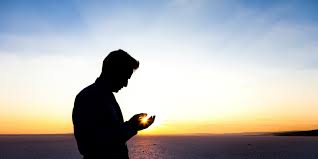 Today, my son apologized for “being too pushy”, nagging me to read a story he had written.  He said it’s only because my feedback is important to him.  I was not annoyed of course.  On the contrary, it made me very happy because, if anything, his nagging meant he acknowledges my expertise and skills in the field and values my feedback.  My opinion matters considerably to him, and that’s a very gratifying feeling that any parent can identify with.

His words gave me an insight into one of the reasons praying to God is of paramount importance, and why God loves that we pray and send requests to the point of nagging/insisting.

Some misrepresent God’s urging us to pray to be a self-satisfying need to feel greatness or power.  Well firstly, no being of such magnitude and powers would “need” the acknowledgement of us, the most insignificant creations.  He would be more concerned with the much grander creations (planets, galaxies, the whole universe) praying to Him (and we know they do!!).  It is we that need that.

Praying and asking God for forgiveness, for Him to be happy with you, or even for some worldly rewards, is actually a combination of the following:

It is a proof by deeds, not empty words, that you truly believe in Him, just in the same way that love cannot be substantiated merely with words.

A man tells a woman “he loves her”, yet she never hears from him.  She calls him 5 times a day, he dismisses the calls justifying that by replying that he’s too busy or has important meetings, he’s going out with friends, etc..  Can she still believe him? Wouldn’t she naturally question his love? Even breakup with him?! All she asked for was for him to at least call her for 5 minutes, five times a day, to tell her he remembers her, needs her, she means the world to him, and is everything in his life.  That’s the minimum a lover is expected to do.

Your employer continuously pays your salary, bonus, and other wonderful rewards.  You totally ignore his orders, are not on-time for meetings, you don’t report to him, nor even acknowledge his existence, let alone authority and judgement.  You go as far as disobeying his orders.  Isn’t it normal for him to dispense your services?!  You’re basically telling him you don’t need the money nor the position.

There is, above all that, a spiritual need for us to pray.  There’s a constantly nagging feeling when we don’t pray that we’re neglecting something important, duties, that we’re going to be accountable for!!  Our souls remain restless.

I heard once a very compelling deduction on “sleeping” (another one of science’s shortcomings of explaining why we need to sleep).  The human consists of two things: the physical body, and the soul/spirit.  The physical body’s needs are essentially the food, water and exercise.

The soul, on the other hand, has different types of needs that are equally crucial.  One of them is “sleep”!

Sleep-deprivation leads to all kinds of issues, from weight gain to a weakened immune system, and even eventually death. And after decades of research and discoveries, the answer to the “Why we need to sleep?” is essentially not answered yet.  While it’s easy, for example, to explain the need for eating being the means to obtain the necessary nutrients, it’s not the same with sleep.  It’s not clear why the outcome of sleeping can’t happens while in the wake state.  Or what in essence is the difference between the wake and sleep states.

Islam explains “sleep” as being a form of death, calls it a “minor death”, during which the soul leaves the body and this realm, and floats to another.  The soul needs to make this separation every night, to evade this material existence, in order to rest, reset and recharge spiritually, coming closer to its Creator.  Afterwards, it either returns back to the body (if the person has more time to live) or doesn’t, and he’s declared medically dead.

This is one of the needs of the soul.  Another, is the need for the connection/communication with its Creator through prayer and supplication.  It greatly comforts the weary and anxious soul.

He needs our prayer?!  A being that created such an unfathomable universe with all its creatures, the ones we know and the much more we have yet to know, needs us tiny little beings to acknowledge that he’s powerful?! Really?!!

It is we that need to reach out to Him and draw ourselves closer to Him.  And He Knows that, because He created us and is merely telling us how to live our lives in the manner that brings us happiness and serenity.